For a large chunk of their lives, Jessica Share and Aaron Long were complete strangers. Share had been a single mother raising her children, and Long had been living his life as a single man in Seattle. While it’s common for people to fall in love via dating sites, Share and Long were unknowingly connected with something far more unique. The story of how these two fell in love is certainly bizarre and wonderful all at the same time.

Aaron had led a very fascinating life. Equipped with a Master’s degree in Literature, Aaron taught English abroad for quite some time. He also held jobs as a cab driver, a writer, and as a musician. Once he came back home to Seattle from his overseas travels, Aaron wanted to make a quick buck. This led him down a rather interesting path.

Jessica interestingly enough was involved in a lesbian relationship. At the time, Jessica and her wife resided in Ohio. The couple decided that they eventually wanted to become parents. This led them to researching the possibility of having a child.

Jessica decided that she would look to a sperm donor as a way to get pregnant. Not wanting to know the person providing the sperm, she enlisted the help of a sperm bank. There were specific requirements Jessica wanted in a potential donor. The individual needed to have average weight and height. Duly, she wanted someone with wavy brown hair — and an interest in both literature and sports. After months and months of the insemination process, Jessica ended up getting pregnant. She gave birth to a beautiful baby girl named Alice. 18 months later, her partner gave birth to another daughter. The mothers and their daughters appeared to be a wonderfully happy family. However, a few years later, all of this changed. Jessica’s wife abruptly ended the relationship when the children were babies. From there, her wife cut off all communication — including blocking Alice from any interactions with her sister. To this day, poor Alice still has no communication with her sister or anyone from that side of the family. This led young Alice down a path of curiosity regarding her own biological father. Wanting to know about her ancestry, Alice was given a DNA kit (23andMe) for Christmas. With a simple sample of saliva, the kit tells people about their ancestry, health, and potential biological relatives. When Alice got the results back, her and her mother received a shocking surprise. It was revealed that Alice’s biological father was a man named Aaron Long. The DNA results also revealed a half-brother named Bryce Gallo. This was a lot for Jessica to take in. She had never known the true identity of her sperm donor. Jessica then went on a wild goose chase to find the biological father of her daughter. After combing through a plethora of social media profiles, Jessica found the man she believed to be her daughter’s father. His name was Aaron, and he had resided in Seattle. Jessica reached out with a very friendly message. She wasn’t sure whether Aaron would even respond to the message — let alone be her daughter’s father. Not only did Aaron respond, but he revealed information which changed the family forever. Aaron sent Jessica a detailed 50-page essay on his life. In order to make some extra cash in his post-teaching career, Aaron had been paid $40 per sperm donation. He estimates that he could have up to 67 children biologically tied to him. Jessica was floored by this news. Jessica also got in touch with two of Aaron’s biological children — Bryce and Madi. The two were technically Alice’s half-siblings. While all of this news was surely overwhelming, it set everything in motion for Aaron to meet his biological children. Little did anyone know that Jessica would also be highly impacted by this occurrence. The plan was for Bryce and Madi to come visit Aaron (from the East Coast) for a few weeks. Upon hearing of this news, Jessica decided to bring Alice to Seattle. Not only did Jessica want Alice to meet her biological siblings/father, but she had also suddenly gotten close to Aaron via the exchanging of messages online.

Aaron threw a huge party for his children. This included friends and family from all over the area. He owns a co-op, and thus had the entire building buzzing over the arrival of his children. Alice went off and spent time with her siblings. In the process, this enabled Jessica and Aaron to get even closer. Though she was dating another man (coincidentally also named Aaron), it soon broke off. Jessica then realized that the biological father of her daughter was someone she cared for deeply:

“I know that I am attracted to Aaron for all the reasons that seemed wonderful when shopping for him in a sperm donor catalog years ago. He is thoughtful, persistent, and academically-minded. He is enchanted by words. He is empathetic, versed in stories about people and the strange things they sometimes do. He doesn’t much care what’s expected of him. He often plays his own music. To his own drum.”

Jessica and Aaron began to get romantically involved. The story is rather wild — considering Aaron was at one time Jessica’s sperm donor (and the eventual father of her child). Ultimately, she fell in love with the man who provided her with her most precious gift 12 years earlier. Though unconventional, Jessica and Alice decided to take an even deeper plunge into this newfound relationship. Aaron also echoed Jessica’s sentiments, and realized that the connection between the two was far from platonic:

“The first time Jess and I found ourselves alone we hugged at length in a way entirely inappropriate for people who had just met. Jess says I have mannerisms that remind her of both of her daughters and thus felt instantly comfortable with me.” The mother and daughter left their home and moved to Seattle in 2017. The two joined Aaron at his expansive co-op building. After the initial meeting, Aaron got extremely close with two of his other children (Bryce and Madi). Bryce has been an active member of the military. Though originally living on the East Coast, Madi also decided to leave her preexisting life behind in order to move in with Aaron, Jessica, and Alice in Seattle.

Though he thinks he could have as many as 67 children biologically linked to him, Aaron knows of 10. There has been contact with some of them, and future plans to meet them may be in the cards down the line. Jessica knows this — and is fully supportive in playing a motherly role to any of Aaron’s biological children. The news of Jessica and Aaron quickly spread like wildfire across many social media platforms. A documentary entitled “Forty Dollars a Pop” will showcase Aaron’s story — along with appearances from Jessica, Alice, Madi, and Bryce. In order to promote the documentary, Jessica and Aaron appeared on one of the biggest morning talk shows in the country.

Good Morning America did a full interview with the couple. Clutching each other with adoration and love, Aaron and Jessica spoke candidly about the entire process. For Jessica, the connection was instant:

“You do treat it like a dating profile and you build this story in your head of the values that you have and sort of put them on. What kind of person might not just share our values because I don’t think those are genetic, but being drawn to the same kinds of things that we’re drawn to so that we can all have you know fun family outings on Saturday.” The story of Jessica and Aaron is far from typical. Though the two initially were linked by the act of creating a daughter, both fell deeply in love with each other unexpectedly. A family was created, and the ever-lasting connection will only continue to grow. 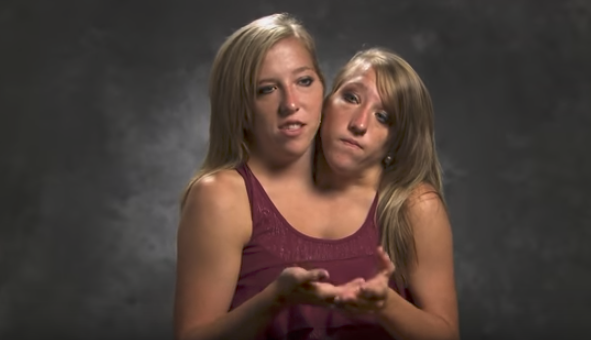