For most children, babysitters are just responsible strangers chosen by their parents. However, some children have the pleasure of calling their babysitters family. One story in particular has caught the world by storm as people hear of the unique gift one young lady received for her 16th birthday. The ever famous “Sweet Sixteen” typically consists of spoiled teenagers receiving an overpriced car and an insane blowout party thrown by the their parents. This story is different. Lauren Blank was absolutely blindsided by the incredible gift she was given on her big day. Having children is known to be the most magical thing in the world. People say the love is indescribable. Luckily, for most people, a bonus comes along when their child bearing years are over – the gift of getting to love their children’s own little miracles, as well. That was the case for Ron Petrillo. Lauren’s grandfather, Ron Petrillo, was her babysitter from the age of 2-5 years old. Because of this, they developed a much stronger bond than most children get to achieve with a grandparent. Lauren has always been the light of her grandfather’s life, but she never could have expected how their relationship would impact her 16th birthday.

Lauren had no idea that her grandfather had been developing her birthday present for over 14 years. While she had a list of things that she desired, the gift from her grandfather would surpass all expectations. It turned out, he had been planning a gift that would keep their memories alive forever. Ron was proud of the gift he had developed for his granddaughter, but he struggled to figure out the appropriate time to present it to her. He debated giving her this gift on her 16th birthday, her 21st or possibly even when he passed. Unlike most gifts, this one took time. It took effort. It was not purchased the day before her birthday and wrapped carefully like most. Ron had a life changing, emotional gift waiting for his beloved granddaughter, Lauren. Now, he had to decide if it was time to finally present it to her or not. Ron stated, “I thought if she was straightened out and being a good person and being nice to people that was important,” according to eternallifestyle.com. Ron had finally made the decision to uncover this secret gift for Lauren’s 16th birthday. Ron has stated that the main reason for his decision was the idea of sharing this gift with Lauren instead of making her experience it alone after he passed. He figured that the gift would be more meaningful if he could experience Lauren uncovering his sentimental, long term project himself. While Ron held such a close bond with his granddaughter in her early years, they slowly drifted apart as she grew older. While this is natural for most, Ron had an advantage: he always knew that he had their memories locked in. When Lauren was finally able to open her unique present, she was extremely confused. At first, she had no idea what to think. She had uncovered multiple notebooks labeled “Lauren book 1, 2 and 3,” What in the world was she about to find in these notebooks? Lauren began reading these notebooks and soon realized that they were a sequence of journals. As she read, she remained confused. Little did she know, once they made sense, these journals would change her life forever. She continued reading and discovered something extremely emotional. The first page of this mysterious journal read, “Hi Lauren: I’m just starting this so some day you might read it for fun.” This was written on February 16, 2003, by her grandfather. “It’s going to be a day-to-day record of you and me.” These journals were filled with detailed, day-to-day activities between Ron and Lauren. Although Lauren was confused at first, the memories started coming back to her, leaving her in tears. Lauren had realized just how special this gift was. Lauren Blank has explained her feelings towards these lost memories with overwhelming emotion. She told TODAY news, “He used to do this ‘See Ya’ game. And he would run into the wall over and over and over and I would die.” Memories like these would have vanished if not for the journals. Speaking with TODAY.com, Ron Petrillo said, “When you’re little, you do the same thing over and over again. When Lauren discovered this one elevator, we would have to go up and down again in what she called an ‘alligator.’” It was yet another memory saved by simply recording the moment. Ron even wrote special sections while Lauren napped. He explained his genuine love and appreciation for his beloved granddaughter. It is safe to say that Ron Petrillo is one of the most loving and caring grandparents of all-time. Ron’s goal was to capture moments in Lauren’s life that she would not normally remember. As we grow up, we tend to forget the earlier years. For Lauren, it has been an absolute blessing to have a loved one write down such important moments. Lauren recently stated, “I’ve had so much feedback from other kids my age who say they want to get closer to their grandparents. Or, it’s been a real eye-opener for them to appreciate their grandparents while they are still here. I truly don’t think that I will ever have a gift that is greater than this.” Lauren’s story has gone viral, but the most important “share” is between Lauren and her grandfather, Ron. This gift has helped to rebuild their bond and create a more involved future for the two of them. Now, Lauren and Ron’s memories will never fade. 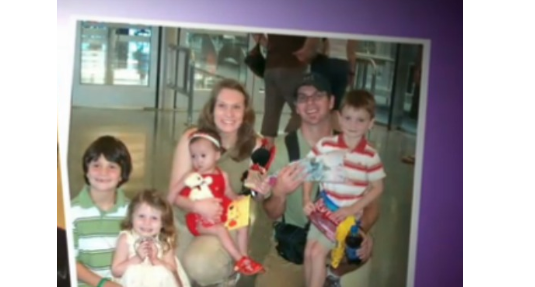