Jennifer and Thomas Doering of Wisconsin adopted their beloved baby girl, Audrey, years ago from China. The couple already had three biological boys but had a mutual passion to adopt a child in need of a loving home. While the adoption went smoothly, there were some physical complications.

While the Doering’s absolutely loved their boys, they had a gut feeling that they were just not complete as a family. This led to their final decision to adopt – leading them to their daughter, Audrey. In the meantime, Nicole and Scott Rainsberry of Washington State had the same idea. The Rainsberry’s were surprised with their third child just before deciding to adopt. While most couples would cut the cord after a third “surprise” baby, these parents made the decision to expand and adopt a child, as well. They were open to adopting any child, even one with special needs. Jennifer and Thomas Doering and Nicole and Scott Rainsberry had completely separate searches that led them both to China. The search was finally over and both families fell in love with their adoptive children immediately. However, they didn’t realize that things would be a bit more complicated than expected.

Once the Rainsberry’s finally met their beautiful little girl, they were informed that Gracie had a severe heart condition. While this was very hard to process, it did not change their desire to take her home. They loved her all the same and prepared to take the required medical steps to keep her healthy. Shortly after the Rainsberry’s, the Doering’s adopted their beloved Audrey. To their surprise, Audrey had severe heart problems as well. They were informed that at 15 months old, Audrey was not walking yet and they noticed that she was very small for her age. Like the Rainsberry’s, this did not change their minds. Once the children were back in the States, Gracie had to undergo two heart surgeries. This was extremely hard for the Rainsberry’s mentally and financially. However, they made it through feeling as though they had experienced a serious miracle – and Audrey’s story was similar. The Doerings had to put Gracie through one heart surgery, which extremely emotional for them. Audrey made it through and their family felt as though they really had hope towards a happy, healthy life with their beautiful new daughter. Now, 10 years old, Audrey Doering asked her parents for a sister for Christmas. This truly struck a chord with her mother, Jennifer. This request made Jennifer decide to do some research on Gracie’s past – primarily wondering if her daughter had any siblings.

Jennifer Doering did extensive research before she found any leads to her child’s past. She spent day and night searching for answers. Finally, with the help of a Chinese researcher, she found a photograph that she immediately knew would change their lives forever. The photo that Jennifer Doering found was of her daughter, Audrey, before they adopted her. The shocking part was that she was pictured with a child that looked exactly like her. Jennifer immediately wondered if this identical child could be Audrey’s twin sister. When Jennifer found this photo, she was desperate to find the other child pictured. With the help of Facebook, Jennifer finally found the mother of the other child, Gracie. Jennifer Doering and Nicole Rainsberry made contact and set up plans to bring their daughters back together.

Both sets of parents went on to say that the entire experience was extremely surreal for them. Seeing pictures of a child with the same hair, smile, eyes, etc. that wasn’t actually their child was a very odd and beautiful thing to go through. The next step – Audrey and Gracie meeting. Audrey and Gracie began Facetiming when their parents shared the exciting news with them. They could not believe what they were seeing as they seemed to be looking in a mirror. Gracie reported, “I thought my parents were, like, playing a joke on me” according to ABC News. The girls met for the first time on the television show, Good Morning America. “I was, like … started to cry a lot, and my mom kept on asking me … what my crying was for, and I was saying, ‘I don’t know,” Gracie said. “I didn’t know what to think.” The girls had an extremely emotional experience meeting for the first time, which actually caused a lot of controversy. People didn’t exactly understand why such a personal experience needed to be televised. Either way, it was an absolutely precious moment and most people were just happy to have been able to see it. After the show, the girls were surprised with tickets to the Broadway musical, School of Rock, so that they could spend their first weekend together in celebration. They also surprised them with a certificate to feed both families at Planet Hollywood. To top things off, they were provided airline tickets to visit each other at their time of choosing. Audrey expressed on the show just how she felt in a very mature and touching way. When the hosts asked her how she felt about meeting Gracie, she replied, “It felt like there was somebody missing. Now, it’s complete.” Her sister responded with tears and a hug. In the year the two have known each other, the girls have learned quite a bit. They have reported that they share the same favorite foods (Chicken Alfredo and Mac n’ Cheese), they both love music, and they both (oddly) love to scare Pigeons. The families now need to decide how to adjust to technically having two families instead of one. Audrey and Gracie are sisters, meaning their parents and siblings are now intertwined. They are all very willing to keeping this family open. Audrey and Gracie have a very promising relationship ahead of them. 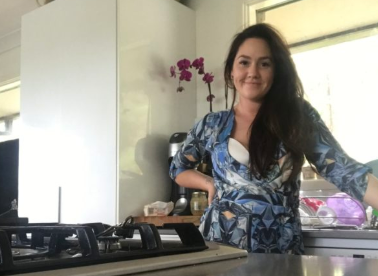 After Giving Birth, She Felt Off – What She Discovered Next Was Almost Impossible